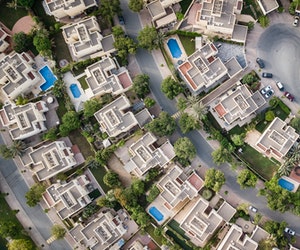 The development of a great number of luxury real estate in New York has been on a skyrocketing rise in recent times. For example, there are almost 300 apartments located around a seven-block stretch of 57th Street and nearby, costing about $5000 per square foot that is either currently up for sale or will be very soon, more likely before the next 24 months.

Data on luxury real estate sales in 2013 shows that volume of sales for most assets was concluded for the year at about 55 transactions. This achievement came on the heels of a sale of a penthouse at a record of about hundred million dollars ($100,000,000) in New York City. The reverse was the case in the year 2015 as sales data for the year showed that the sale of high-end real estate closed at a low rate of 47 transactions as at against the record 55 sales of two years earlier.

Developers and brokers tend to think that the number of transactions for this year could be quite lower. This they believe is due to the slow growth of China’s economy, coupled with the falling prices of oil and other market commodities. This imbalance is a tell-tale sign of the incoming glut in the luxury market as prices for lands apartments, storefronts and hotel rooms have gotten quite too high and from observation, these prices are viewed as being too high.

Despite these, signs coming in from the luxury real estate market tend to posit otherwise. It seems like the hard knocks have not yet gotten to most of the major high-end luxury estate developers and there have probably been no real changes to the way things used to be in the luxury market. These, being postulated, reiterate that whilst there is a major slowdown in the luxury market, it is not a bad thing altogether as a temporary halt in the rise of high-end real estate properties could spell good fortunes.

The dangers and risks of solely focusing on the super-rich become more and more evident as the days go by. Developers have begun cutting down on the prices of their luxury estate prices thereby bringing down prices. Meanwhile, other New York City developers are looking into the prospects of dividing up larger square units of their high-end luxury properties and selling them off as smaller apartments. Also, recent plans by a developer to convert a hotel into a luxury tower have been shelved off.

The effect of the pursuance of oversize profits are already beginning to show in certain cities as high-end real estate properties in the form of retail stores are now beginning to become vacant as occupants are beginning to abandon these properties for cheaper ones. Retailers of these retail stores are beginning to step back also and look the other way as landlords around Madison Avenue, New York City increase rents to $2000 per square foot. The costs of occupancy are now over the roof, and as such, making profit after paying such occupancy costs for these retail luxury real estate properties can’t just be achieved.